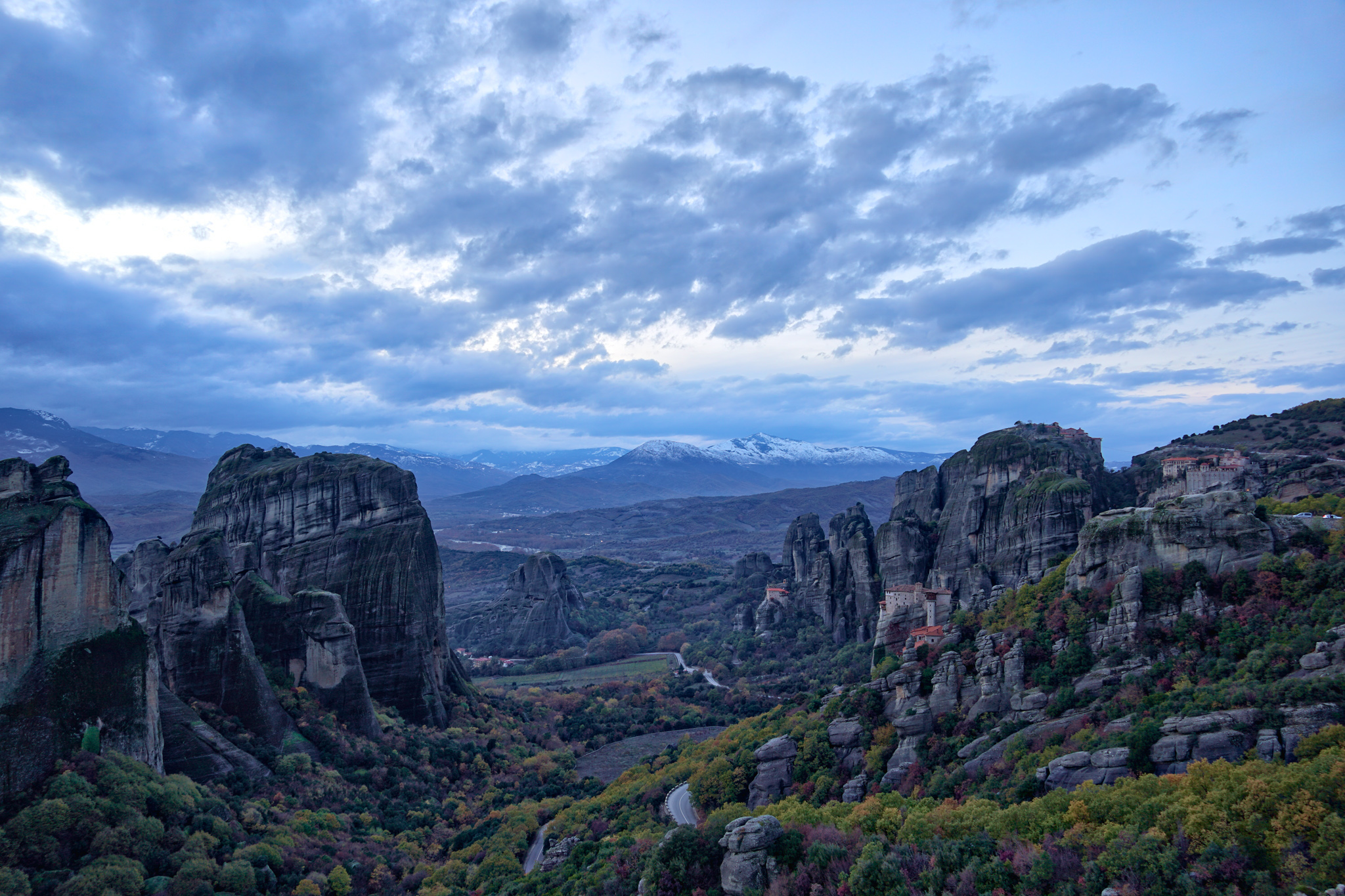 Overall, driving the loop up to the Monastery road and back down to Kalampbaka downtown was highly rewarding. I looped so many times and at all times of the day, especially when learning the fog patterns on overcast days.

Not far along the hike from Kalampbaka to the Holy Trinity Monastery, There’s this great spot, especially if timed with the fog rolling in or a sunset. The fog really does roll in quick; all of these photos were taken within a one minute time period.

There are two pullouts on the top part of the main road along the monasteries. They are both great for overlooking the rocks, monasteries and are very crowded in general and especially at sun-related times.

I was playing with long exposures at night, that turned out to look like sunset or dusk.

Park at the base of Rousanou Monastery to look out at a prime view of St. Nicholas Monastery and some incredible scenery.

Near the end of the monastery road, and close to St Steven Monastery, this is my favorite spot for sunrise.

There are a few one-car-sized spots to pull over along the road the road that offer unique shots.

Taking a step back

After 5pm one night it got too foggy for photography near anywhere i’d been so far. I looked at the map and picked a spot to get a better view from afar. I was not disappointed.

I think the extra-bright spotlights they put on the rocks are really interesting but creates a bit of a blown-out contrast for photography. Because of this, at night, I generally preferred photographing the opposite side where I could get a more even distribution of light with long exposures.

Every monastery is nothing short of incredible in it’s own way. I couldn’t possibly pick a favorite, and they are all worth visiting.

And from the inside. Though every monastery has photography-restricted areas.

There are so many cats (and dogs, but be cautious)

Bring Hand Sanitizer so you can greet these friendly creatures without worry.

Learn from me. Do not take long-exposure shots of cats that are still other than actively moving their head. The result is very, very creepy. Borderline terrifying, so I will leave it visibly-optional.

I almost didn’t go at the last minute, I was so dismayed by the weather forecast. It turned out to be a wonderful challenge and the mist really enhanced some photos! There were very few people as a result as well.

That being said, there were many golden-hour opportunities that weren’t available. I ended up with a very different style of photos than I would have if I’d had sunny weather.

When cloudy, the fog comes in at 5pm sharp (November), and within a few seconds. So getting those night shots right after sunset is critical. After that I needed to wait until post-midnight for it to clear.

One AirBnB canceled on me at the last minute, which is a longer story, but got another one with a kitchen. The kitchen really helped being able to have  take-away food for adventuring at any time and at my own pace.

The other place I stayed, when I realized I never wanted to leave, was a room in a guesthouse. This was cheaper, nice, and because it had a small fridge, would have been just as adequate.

There are a lot of tourist traps and mediocre cafe’s in Kalampbaka. I would recommend some of the traditional taverns in Kastraki or my #1 favorite place I found in the greater area.

First lets set the mood. Filled to the brim with cigarette smoke so thick it was hard to see, not a word of English, no menu, and everyone gaping at me walking in. Now we’re talking. Oh, and this was playing

The only English to be spoken was “Snack?” And if you want food, the only answer was “Ναί” (yes). I was given a series of small Greek tapas plates with cheese, sausage, chicken, tuna, tomato, ham etc. I had to try their Ouzo as well. It was all incredible, and so cheap. If you’re still hungry, just say the magic word and hold up a number.

I found the dogs to be extremely territorial. There was one time I got out of my car at night, in the middle of nowhere, and got rushed by 5 stray dogs that were very angry. I got back in and went somewhere else. Keep an eye out.

Even in the middle of town, be prepared for a confrontation.

Aside from climbing the hundreds of steps up to the monasteries which are hikes themselves, there are a few and wonderful greener paths.

Just follow the orange and black clairvoyant symbol next to the abandoned church and i’m sure you’ll be fine.

Hike 2 – From Kalampbaka up to the Holy Trinity Monastery

This was my favorite. …

Based on my photos, I think i was hungry. If you are as well, and you eat meat, certainly go to this specialty deli restaurant here.

A wonderful island, filled especially with newlyweds. During off season there’s only one flight per day and it fills up, and ferrys are scarce, so book in advance. It’s particularly warm and inviting despite occasional rain, and great for night photography.